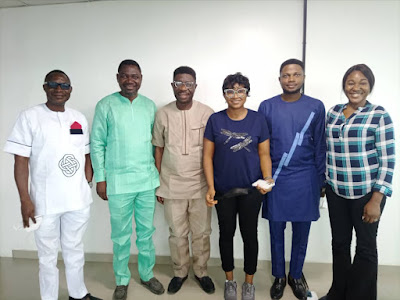 Representatives of the custodian of the art & culture of film-making in Nigeria, Directors’ Guild of Nigeria (DGN) paid a courtesy visit to the award winning Lagos based Africa TV & Film production company, ROK STUDIOS on Friday, April 16, 2021.

The DGN delegation, led by President Victor Okhai was cheerfully received by the Founder / CEO ROK STUDIOS, Mrs. Mary Remmy-Njoku at their Anthony Village office for an engrossing and enlightening muster.

The purpose of the visit was to establish a partnership between DGN and ROK STUDIOS to embolden the industry and its creativity to a point of global recognition across all standards.

In the course of the meeting, the DGN President commended ROK Studios for building contents vis-a-vis empowering filmmakers, providing jobs for practitioners, and also building a strong institution like ROK Studios for the industry growth. He updated her that the DGN is not unacquainted with her dogged altruistic resolve and constructive impact on the Nigerian film industry.

President Okhai who apprised about no two standards in film-making ensured the ROK boss of mutual benefits alongside members of the Directors’ Guild of Nigeria, as a few directors are writers and producers.

“I want to thank and celebrate you for providing jobs and empowering filmmakers in the Nigerian film industry. I visited several sets in Enugu, Delta and Lagos when I was campaigning, and I saw a lot of your impressive inputs on content creation and development. DGN is fully aware of your extraordinary push, but one thing I want to assure you is that under my watch integrity, excellence, professionalism is key to us. We will not compromise or lower standards but compete favourably with the best global practice.”

The President of the apex guild in the audio-visual sector of the Nigerian creative industry went on to solicit how a joint collaboration can be attained for capacity building on members of the guild.

“Capacity building is very important for us. I want to see our members be part of the trainings you embark on, since a lot of them are already working with you. It’s an area we’ll like to partner with you to deliver the standard and quality that will elevate the works that you do; and whoever is directing is a member of the Directors’ Guild of Nigeria.”

Mrs. Mary Remmy-Njoku gleefully saluted the new leadership of DGN, and announced her acknowledgement of the need to take new initiatives to focus on the technical side of film-making. She informed that her producers are given free hands on selecting who direct their movies, but nevertheless would unreservedly incorporate the guild into her capacity programme since a conflation has been reached.

She enlightened that contracting directors is restricted to the production company assigned to the project. “It is only when the director performs below standard that a look in on his qualities would be made. We have our annual production like Susanna where we contract directors, but ROK don’t contract directors personally since we work mostly with independent production companies. We don’t dictate who directs for them, but we know who would not direct, and that’s based on a director’s personal past record of style, and lack of in-depth knowledge of the craft.” She confirmed.

The ROK boss conversely thrashed around with pain on directors who learnt nothing on the job, but go about claiming to be experts without training, or having no knowledge of the required dexterity needed for the practice.

She disclosed that signs of mediocrity were piquantly spotted on various movies submitted to them that necessitated the dire need for the ROK capacity building scheme to inspire trust and professionalism.

“Most times, in every 200 movies submitted, after watching a hundred plus, you can only find two good films, thereby making producers believe we discriminate; overlooking that majority of films shown on ROK are not just movies we commissioned, but also other producers with no exclusive rights attached to contracts.” She explained.

In January 2020, a Corporate Social Responsibility capacity building scheme on light, camera, sound, colour grading, and even production to uplift industry’s professionalism was foisted into existence in Lagos and Enugu, with a follow up in January 2021 in Lagos and Asaba respectively. According to her, she had to include production since she discovered that producers have become middlemen between the director and post-production.

The ROK lady who prefers supervising her training programmes said, “If you need something done, you need to do it yourself. We are trying to see if we can have these workshops twice a year, as there are lots of directors and other below-the-line crew members out there that know next to nothing in film-making. I believe as a director, you must a little knowledge of everything about film production, whether camera, light, sound, colour grading, format to achieve a better production quality in your story telling. The need for capacity building to use these tools to achieve one’s end arouse from our personal experience through movies tendered to us. However, if you’re not creative, you don’t have it because creativity is not learnt, but inborn.”

She vented her exhilaration to see great names in Nollywood attending ROK’s capacity building programmes in Asaba, and stressed to applaud the efforts of few filmmakers who with little exertion of pressure produced an unlimited film with good storyline.

“At the Asaba capacity classes for camera and lighting saw the likes of Michael Jaja, Ugezu J. Ugezu and other names which really gladdened my heart, because everyone needs to be trained and retrained. Believe me, I really extol the innovative prowess of few filmmakers trying to squeeze the juice of creativity with just little given them to produce.” She affirmed.

The DGN President gave her an imperturbable tranquility on ways to go about the training by elevating the art of the industry.

“At the index of the creative triangle of the director, we want to be part of whatever you’re doing, because it’s the same people that will be working directly or indirectly with you since some of their works will be coming directly back to you. Our members are looking forward to more tactical negotiations and cooperation between DGN and ROK Studio that will benefit them in the long run since the director is first among equals.

No comments to show.