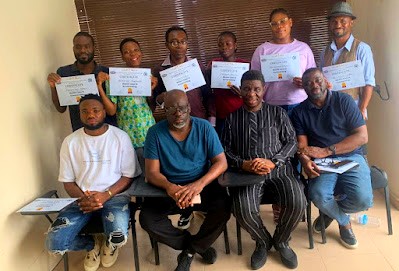 In light of the need for capacity building and a higher level of professionalism in the Nigerian motion picture industry, A 5-Day intensive Master Class in Screenwriting workshop by the International Film and Broadcast Academy, Lagos, Nigeria has distilled the essential elements from the world’s best screenwriting programmes to create a super-intensive screenwriting workshop.
The workshop, which was a partnership between the International Film and Broadcast Academy (IFBA) and the Lagos State Film and Video Censors Board (LSFVCB), was held at 13 Simisola Street, Surulere, Lagos on June 13-17, 2022 and received over 100 submissions via email from aspiring screenwriters with little or no screenwriting experience who wish to improve their storytelling skills and explore the fine art of writing visual narratives.

According to the lead resource person, Mr Yinka Ogun, President, Screen Writers Guild of Nigeria (SWGN), and a screenwriting mentor whose credits include ‘Tinsel, Oloture (Netflix original), Your Excellency, The Royal Hibiscus Hotel, who openly expressed his respect for the organizers and Mr Victor Okhai was excited with the turnout and hailed the outcome. “They have been equipped to go out there and excel as storytellers. The sky can only be their springboard going forward.”

Mr Ogun affirmed that “But hey, I have a lot of respect for Mr Victor Okhai as a practitioner, director and film proprietor. Screenwriting is getting better with each passing day. If more people dedicated their time to improving themselves personally, I think that we will soon arrive at a very good pace and soon have good writers.”
With strict adherence to the rituals of writing and learning, the workshop concentrated on the professional development of various aspiring screenwriters in the film and television industry who can work in a fast-paced, high-pressure, focused and experienced environment to seasoned career writers, as recommended by Mr Victor Okhai, President of the Directors Guild of Nigeria (DGN), and participants had the opportunity to develop a fully structured outline for a feature-length screenplay, including several completed scenes, and complete short.

Mr Kingsley Omoefe, former Vice President, Directors’ Guild of Nigeria and one of the participants who are not strange to IFBA organized workshop appreciated the moves taken by IFBA and LSFVCB to equip writers in the industry. “It’s quite an insightful, interesting and impactful programme which I benefitted a lot. It couldn’t have come at a better time than this time. Mr Victor Okhai is a perfectionist and wants everything to be done rightly, and that translates to whatever he’s doing. He did the best in the person of Mr Yinka Ogun, our resource person who is an experienced writer, and one of the best creative screenwriters in Africa. For LSFVCB to partner with IFBA shows how credible the institution is, and very important for Lagos state to want to take the creative industry to the next level.”
2022 Overall Winner of Aforevo Nollywood Screenwriting Competition, and the N1 Million winner, Cosmos O. Abasi expressed his excitement about his participation while commending the organizers for their contribution to the success of screenwriting in the film industry in Nigeria.

“I thank the organizers, LSFVCB and IBFA for doing a great job to put this together, and I wish stuff goes into several other departments of filmmaking. The training has been novel, exciting, interesting, educating and sort of an eye-opener, because I’ve learned a lot about different kinds of pitch decks from the resource person, Mr Yinka Ogun, and our amiable DGN president, Mr., Victor Okhai. So now, I can conveniently say, I know how to pitch.” He stated.

The President of the DGN, Mr Victor Okhai, who was enthusiastic about the workshop, remarked that the method of storytelling through screenwriting is both an art and a science. According to him, the workshop is intended to be a quarterly event as we have several ongoing classes and master classes in directing, production, cinematography, art design, and costume and makeup.

“This workshop is supposed to be a quarterly event, as we have several ongoing classes and master classes on directing, producing, cinematography, art designing, and costume and makeup. We must learn the art of storytelling and master it, but you need to know how to package them so they can pitch them successfully to potential investors and platforms to get funding to the next level.“
The DGN President explained that human stories are stories that every human being can relate to, and if you know how to tell them well, regardless of the setting and location, people will relate to the story, exactly how you do it with some movies will never be forgotten even growing up as a kid.

“Screenwriting is both an art and a science. Everyone is capable of speaking, but not everyone can captivate an audience. Anyone can write, but everyone can write the kind of material that holds audiences captive for more than 90 minutes in a dark room. You cannot do magic if you have a brilliant director and a poor script. People will relate to a tale if it is told well, regardless of location or climate, much like with some films that you will never forget even as a little child. Human stories are stories that anyone can relate to.” Okhai stated.

No comments to show.